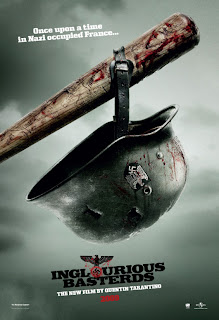 When I was 13, my parents took me to see The Power of One, which deals with the injustices of apartheid. I remember that at one point the main character committed some act of righteous violence against the Bad Guys, and I yelped with glee. I may have even stood up, I was so excited. My pacifist parents -- who raised me without war toys, war games, or corporal punishment of any kind -- were taken aback. I felt sheepish afterwards, but in that visceral moment, who wouldn't cheer for the hero as he brought the hammer down on the despicable villains?

I saw Inglourious Basterds tonight, finally, and it brought up similar feelings. If you haven't been living in a hole, you know that Quentin Tarantino's World War II revenge saga-as-Peckinpah Western is about an elite band of Jewish-American soldiers bent on killing (and scalping!) as many Nazis as possible in occupied France. (Be aware: Spoilers follow.) As their fearless leader, Brad Pitt is all kinds of fun; in the role of a strong, Jewish heroine (reminiscent of the Bride character from Kill Bill), Mélanie Laurent gives the film a lot of heart. It isn't, as some critics claim, an empty stylistic exercise. Not by a long shot.

According to my mother, her shul's rabbi encouraged the members to see Basterds because it tackles the subject of Jewish vengeance. While I wouldn't ask everyone I know to stomach Tarantino's graphic violence, I agree that the movie touches on some meaty issues. And where the similarly themed Munich was self-important and casually misogynistic, Basterds offers a good time at the movies and a kick-ass female protagonist. Tarantino even points up the antirealism of old WWII movies, in which everyone magically spoke English, by subtitling more than half the dialogue. (The film is in English, German, and French, with a little Italian tossed in for good measure.)

Spielberg and QT may be equally unsubtle filmmakers, but Tarantino's still got something Spielberg hasn't had since Jaws: the ability to serve up dark, energetic entertainment without worrying all too much about making The Big Point. Keep the slow-mo sex 'n' death mashup near the end of Munich and give me the final swastika-carving scene from Basterds. There's putting too fine a point on your movie, and then there's using the point at the end of your knife. I prefer the latter.

Tarantino builds the story in chapters, and yes, the movie is two and a half hours long, and yes, sections of it are talky, but many scenes crackle with real suspense, the entire film is absolutely gorgeous to look at, and no character is safe from harm. (That's been a Tarantino hallmark since Pulp Fiction, and I've always appreciated it. The fact that anyone could die packs a lot of emotional power.) Laurent's Shosanna Dreyfus communicates a great deal with her eyes, and by film's end I'd grown surprisingly attached to her.

Tarantino is known for outrageous violence and obscure movie references, but he actually uses violence very carefully, and his references don't crowd out the immediate drama of each scene. What happens to Shosanna's family is depicted both brutally and bloodlessly; a lesser director would have chosen one path over the other, but Tarantino has the insight and skill to combine them to devastating effect. (The Coens made similar decisions in No Country for Old Men.) As for QT's love of movies, he expresses it more touchingly than ever. During the stunning sequence in which Shosanna dons makeup and a red dress, the shots he gets are sweet tributes to feminine beauty and power in cinema.

Though Christoph Waltz's portrayal of notorious Nazi officer Hans Landa gets hammy towards the end, it's nothing he hasn't prepared us for. From the haunting first scene until Landa meets his supremely apt fate, Waltz lives up to his surname, dancing us in and out of the villain's evil aura. He comes off as smarter than the Nazi high command, whom Tarantino depicts as feeble-minded, violence-crazed man-children. Yet he isn't smart enough to elude his karma, which strikes him as soundly as it does Hitler, Goebbels, and the rest.

Some critics have suggested that Tarantino trivializes the horrors of the Third Reich by using the era as a backdrop for a bloody revenge tale. Yet there have been plenty of uprising films -- last year's Defiance, for example -- that won plaudits for telling true stories of Jewish resistance. Tarantino frames Basterds as fairy tale, fable, wish-fulfillment fantasy, and alternate history, but its climactic scene in a Paris movie theater works beautifully enough as simple catharsis.

We can't revive the loved ones we lost to the Nazis; we can't undo the infinite damage wreaked by the Holocaust. But we can take a trip into our darker dreams of vengeance and behold the splendid, horrifying sight of a building full of Nazis exploding into the Parisian night. That scene is astonishing cinema, balletic and relentless and in tune with the subconscious desire of countless Jews still furious about what happened to their people -- our people

There's a moment in which Eli Roth's character, nicknamed the Bear Jew, keeps gunning at Hitler even though the Führer is clearly dead. Out of context, it sounds juvenile and obvious, but after nearly 150 minutes of emotional buildup, it feels good -- it's a welcome release. Maybe that's fucked up, maybe not. Either way, it's worth talking and thinking about, and to me, that makes Basterds a strong piece of work.
Posted by Neal at 11:06 PM

Do we know that Pitt isn't meant to be Jewish? I don't remember anything in the movie indicating so explicitly. (Obviously he doesn't look "Jewish," but that doesn't always mean anything.) And yes, the movie is great.

I've read in reviews that he isn't supposed to be. I'll look into it.