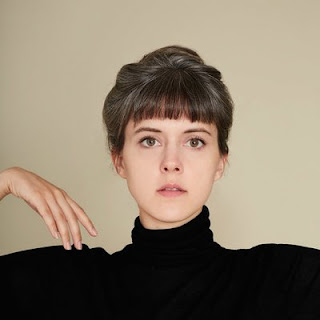 I discovered Grace Rex's short film "This Is She" while browsing Vimeo's horror/thriller category. That's ironic considering how Rex herself described the film to me in a recent email exchange. "I am surprised when people refer to 'This is She' as a horror film," she wrote. "I think of it as a quiet, non-narrative film that has some psychological themes and uses practical effects to create visual representations of those ideas." The rising indie director, writer, and actress tweeted at me after I wrote about "This Is She." In our email "interview," I asked Rex about her creative process in relation to "This Is She," her bittersweet short "Be Good," and what she's working on now. I've reproduced the exchange below, edited for clarity.

Red Blue Green: What projects are you working on now that you’re excited about? And what can you tell me about them? (e.g., "High & Dry")

Grace Rex: "High & Dry" is a new British sitcom for UK's Channel 4. It concerns five people who wash up on a desert island after a plane crash. We filmed on an uninhabited beach in the Seychelles. I got to meet some amazing giant tortoises. They're huge and very friendly and you can tell they know a lot of stuff about life that we do not know. I still think about them. I think about my four lovely British co-stars, but mostly I think about the tortoises. The sunsets were also incredible.

In terms of my own work, I'm making a short film right now called "Others." It's a series of eight non-narrative vignettes. Each one concerns a different person in an everyday moment who is connected by an umbilical cord to an irreverent being. We just launched our Kickstarter! Can I plug that? I'm gonna plug that. Folks can watch the whole first of the eight vignettes in the project video.


RBG: How consciously did you incorporate horror elements in "This Is She"? Are you interested in horror as an actor, writer, and/or director?

GR: I like some horror movies but I'm not knowledgeable enough about the genre to consider myself a true fan. However, I've been watching a lot of horror movies lately because my partner is a big fan and cinephile, and it's October, so ... I'm getting a good scoop! ... My new project also has some elements that could be described as body horror, so I realize there's something of a pattern there! I'm mostly scared of what's hiding in the recesses of my mind. I find that totally terrifying. Does that count as horror?

RBG: What compelled you to make "This Is She"?

GR: I was going through a difficult time several years ago and felt surrounded by grief for the first time in my charmed life. I couldn't hide from my feelings. They felt like a presence in the room, and I started to think about what the visual representation of that feeling might look like. I was also reading a book by a Jungian analyst at the time who wrote about how trauma presents a unique opportunity to deal with some ugly business in the unconscious that presents itself in times of crisis.

This author believes that you get to kind of greet your true and messy self when things get rough, and if you're brave enough to look at what's been hiding inside of you and integrate it, you can come out the other side with your feet more firmly on the ground. I grew up with such a strong moral compass, a deeply rooted understanding of good and bad, and a lot of shame about being imperfect. This written theory shifts that understanding because it values honesty over perfection. It's an affirming and empowering viewpoint for me.

RBG: How did you develop the concept? In general, what is your creative process like?

GR: Tarik Karam directed the movie and was instrumental in developing its look and tone. He came on board early in the writing process, and I would work on the script and share drafts with him. We went back and forth with notes until we were ready to film.

I haven't made enough work to say I have a defined process; it's developing all the time. I will say that, as a director, I am enjoying making lookbooks and finding reference images from other films and photographers. Creating a written narrative around my intentions helps me define what I want a movie to look and feel like.

RBG: Did you have a metaphor in mind when creating the blob in "This Is She"? What kinds of interpretations and reactions have people shared with you about it and the film as a whole?

GR: The ambiguity of the metaphor is intentional. I like hearing other people's interpretations. I hope it functions a bit like a shabby Rorschach test: In telling us what the thing means, people are sharing something about themselves, and I think that's a wonderful way to connect with people.

Some folks have said the spots represent depression and anxiety, or loss of a loved one. The mother of a good friend told me it reminded her of an article she read about prisoners of war personifying the walls of their cells after being isolated for long periods of time. Some people think it's a mold problem and are grossed out. It's all gravy!

RBG: Did you make up the "red balloon" game for "Be Good," or is that something you knew about and/or played before?

GR: Yeah, I made it up. I was thinking about how people play games sometimes so they have a structure in which to bridge intimacy. Truth or dare is the first example that comes to mind. I gather that, most of the time, when someone suggests truth or dare, it's because they're looking for an opportunity to share or engage in an act of vulnerability. It's hard to talk about scary things, and neither of the characters in that scene in "Be Good" wants to talk about what's on their minds, even though they need to, so the game gives them a way to engage in a more honest conversation.

RBG: How do you figure out how and where (in the story) to end a short? I'd be interested in hearing specifically how you made those decisions for "This Is She" and "Be Good."

GR: This is a good question. I don't know! With both movies, finding the ending was difficult. Just leaving a viewer with a cohesive experience is difficult in a short film. You have so little time to help people care about the images you're making. There are some narrative shorts that I love because they have a great twist in there and they end with a bang. There are others that leave you with this whole, visceral feeling afterward, even when nothing is resolved. I think finding an ending that feels right is a totally intuitive process!
Posted by Neal at 9:06 PM