SIFF Report #3: "A Woman Under the Influence" and "Prodigal Sons" 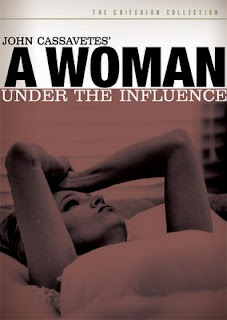 John Cassavetes' 1974 film A Woman Under the Influence feels astonishingly fresh and intense 35 years after its initial release. Gena Rowlands' performance is a wonder to behold; much of it is both awful to watch and supremely compelling. The word "towering" came to mind; I learned after the screening that it's considered one of the finest performances ever captured on film.

That's not hyperbole as far as I'm concerned. Rowlands acts with her eyes, face, body, and voice, and her portrayal of a woman plagued by an unnamed psychological malady never idles for even a moment. Her Mabel is always up to something, and Rowlands lets the character's thoughts and emotions play powerfully across her face without giving away too much. Peter Falk, as her husband, Nick, shifts believably and very movingly from affection for his troubled wife to frustration, and finally to violent outrage at his own helplessness in the face of her demons.

Rowlands' performance reminds me somewhat of Sean Penn's in Milk, inasmuch as both actors throw themselves passionately into their characters and are riveting to watch but never draw undue attention from their costars. They aren't chewing the scenery, merely acting with rare force and intensity; despite the attention-getting nature of their portrayals, they give their fellow performers the space to develop their characters and provide a rich human context for the protagonist's trials. "Elemental" is another word I'd use to describe Rowlands' acting. There are moments in which she seems possessed, bringing to mind films like The Exorcist, and the fact that she adds this layer to the performance makes her character's plight that much more terrifying. It also explains why her husband might resort to physical abuse in an effort to snap her out of it.

The SIFF program mentions the movie's feminist leanings, and there's certainly the implication that a familiar domestic trap exacerbates Mabel's condition. To me, however, the film played more as a story about mental health, and to some extent the mental-health system. That no one, including the family doctor, attempts to name Mabel's malaise seems unthinkable in light of the 21st-century tendency to assign nearly every kind of problem behavior a multipartite name with a handy acronym and a future spot in the DSM. Poor Mabel, however, is just "nuts" or "crazy" in the eyes of her friends and family, and the treatment she ultimately gets is the usual Cuckoo's Nest cocktail: sedatives, group therapy, and electroshock -- in short, everything but lobotomy.

The Mabel we meet after six months of treatment is a quieter woman, a woman careful not to get too "excited" when she sees her kids for the first time in half a year. It's arguable that her condition needed some form of professional attention, that she wasn't simply a harmless kook dancing to a strange beat, but it's also apparent that her husband, an overworked construction-crew chief, simply doesn't have the resources to stand up for Mabel -- something she explicitly asks her father to do toward the end of the film.

The ending Cassavetes chooses only makes the movie even stronger: As Nick and his newly returned wife clear the dishes following an uncomfortable party in her honor, cheery instrumental music plays. Nick has shown that he regrets having Mabel committed; he's also made it clear that despite his questionable behavior toward her throughout the film, he loves her very deeply and would, as he says, lie across train tracks for her. Mabel, for her part, emerges from the hospital in an altered state, but the ending's upbeat tune isn't a sick joke at her expense, nor is it simply a satiric poke at fraudulent domestic bliss or the horrors of psychiatry.

The closing scene is, instead, a bittersweet way of saying that life goes on, though Cassavetes pointedly avoids picking sides or predicting the future. Nick may or may not become a better husband, Mabel may or may not improve over time, and who can say if this deeply burdened marriage will survive? All we know is that these two characters have chosen, this night, to pick themselves up, dust themselves off, and clear the dishes. I don't think their ease and slight playfulness with each other during the credit sequence is anything less than a glimmer of hope; what it isn't is a guarantee of a neat and tidy happiness. Only a less masterful film would give us that.

Kim Reed's autobiographical documentary Prodigal Sons also examines the impact an individual's mental instability can have on family life. In this case, it's the director's adopted brother, Marc, who suffers from mood swings and erratic behavior. He always played a bit rough, according to Kim's biological brother, Todd, but only after Marc sustained a head injury at the age of 21 did he begin to act out in frightening ways. The film was originally intended to follow Kim's appearance at her high school reunion in small-town Montana. The catch: She's transgender, so the person her classmates knew, a star quarterback named Paul, no longer exists.

Somewhat surprisingly, most of Kim's friends and acquaintances take her transition in stride. One woman asks a bit rudely how she can be female but still attracted to women, but that's about as much flak as the filmmaker takes. Marc's breakdowns, outbursts, and sorrowful apologies end up hijacking Kim's documentary, but she seems much more interested in helping her brother than hogging the spotlight. She isn't a tremendously sophisticated director; her movie is technically average, structurally imperfect, and thematically unfocused. But Marc's fascinating, contradictory personality -- his rudeness, sweetness, anger, fear, self-hatred -- held my attention through most of the film.

In a particularly strong sequence, we hear one of Marc's sadder apologies over footage of Kim hauling various items through the snow from their late father's truck to her cabin. Kim's determination as she loads one heavy thing after another onto a plastic sled and tugs it to the house touchingly reflects how hard both she and Marc are trying to have good lives. We suspect, sensibly, that only one of them will succeed. Prodigal Sons isn't as startling as Cassavetes' film in its depiction of mental illness, but both stories force us to consider anew the definition of that term, and to think, however fleetingly, about what we'd do if someone dear to us was similarly afflicted.
Posted by Neal at 7:34 PM

Neal
Spokane, WA, United States
A native of Detroit, Neal Schindler has lived in the Pacific Northwest since 2002. He has held staff positions at Seattle Weekly and The Seattle Times and was a freelance writer for Jew-ish.com from 2007 to 2011. Neal is the director of Spokane Area Jewish Family Services. His interests include movies, Scrabble, and indie rock. He lives with his wife, son, and two cats in West Central Spokane.