"Vicky Cristina Barcelona" and "Pictures at a Revolution" 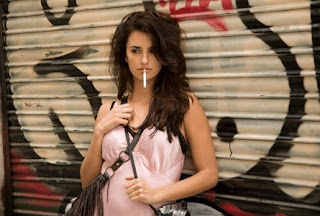 Two raves this week. The first is for Woody Allen's latest movie, which I finally saw -- and enjoyed considerably more than I thought I would. The music (almost entirely Spanish) is lovely, Allen's insertion of neurotic babble into the mouths of his characters remains at a bearable minimum, the whole thing is sexier and fresher than we've come to expect from late-period Woody, and the film contains what may be my favorite shot of the year. (It's a throwaway depiction of small fireworks on a warm summer night, but it shows in a second or two how firm Allen's grasp of place really is. And besides that, it's just plain magical.)

Even the narration, which has irritated more than a few viewers and critics, was something I got used to pretty quickly. It's not unlike Little Children's narration in that sense; initially it seems superfluous and in the way, but by the end it's hard to imagine the film without it. Cruz is a force of nature and steals every scene she's in, bringing a welcome touch of Almodóvarian melodrama to the movie; Bardem is effortlessly suave and, when he needs to be, complex; and ScarJo and Rebecca Hall both bring what's needed to their roles, though Patricia Clarkson makes her small but important role even more evocative of the yearning and sadness everyone's trying to channel.

Maybe Vicky seemed better than it normally would have because I'd seen the dreadful Nick and Norah's Infinite Playlist the previous day, and maybe I was just in the mood for a romantic dramedy set in a country I really wish I could revisit -- but I'm actually thinking it could be one of my top 10 for the year. (If you've already seen the film, this priceless companion piece from The New York Times is a must-read.) Either I haven't seen the right movies this year, or it's been a pretty lackluster one so far, after the relative cinematic riches of 2007. I know that, as is often the case around this time of year, most of the best may be yet to come, but still. WALL·E is the only 2008 film I can recall that, to my mind, surpasses Vicky, but that probably just means I need to search my memory banks. Probably. (Come to think of it, American Teen may be bound for my top 10, too.)

In other movie-related news, I'm thoroughly enjoying Pictures at a Revolution, Mark Harris' bravura telling of the run-up to the 1968 Oscars, wherein Bonnie and Clyde, The Graduate, Guess Who's Coming to Dinner, In the Heat of the Night, and Doctor Dolittle were the Best Picture nominees. Never have I so happily read a nonfiction book with 400+ pages. I can't recommend it highly enough, even if you're not a cinephile, since the fascinating character profiles are somehow both breezy and substantive. Those adjectives apply to the book as a whole, and I've never learned so much about how movies are made -- what an arduous process it can be, and how collaborative it almost unavoidably becomes. Great stuff.
Posted by Neal at 5:55 PM