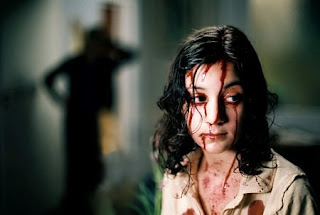 When I was a kid, even the trailers for horror movies kept me from sleeping.

At the age of 10, I was scared absolutely silly by a preview for Nightmare on Elm Street 5: The Dream Child. (Why this was showing before something I would see, I don't know.) Until The Fisher King, which came out when I was 12, I didn't see R-rated movies. It wasn't because my parents forbade it -- it was because I associated the R rating with scares. (In 1992 and 1993, I saw The Crying Game, The Piano, and Schindler's List in the theater, so I clearly had an easier time with frank sexual material and violence in the context of historical drama.)

Over the years, I developed a natural curiosity about scary movies, and by seeing Scream in a dorm lounge during freshman year of college, I became Someone Who Watched Horror Movies, even though Scream's intended effect -- it's a playful but violent spoof of slasher movies -- was lost on me. I was petrified and upset, especially by the opening sequence, during which poor Drew Barrymore suffers a horrible death, along with her unfortunate boyfriend. During college vacations, and especially after graduation, I peeked at horror movies on my parents' deluxe cable -- HBO! Showtime! -- until they scared me beyond a reasonable measure. Eventually, after sufficient training, I started watching them whole. This M.O. hit a snag in 2003, when I rented The Ring -- yes, the American remake -- and frightened myself so badly that it took me a couple weeks to recover.

Which brings me to a night not too long ago. I was having a hard time sleeping, so I went online and came across the Canadian werewolf movie Ginger Snaps, which I'd heard about -- it won a fair amount of critical acclaim for a horror film -- and was curious to watch a little of. You know, just a little, to see what it was like.

An hour and a half later, I'd seen virtually the entire movie -- I skipped a few minutes here and there, not because of violence or gore but because I was tired and impatient -- and had actually liked it. And though I was a bit creeped out (at the time, I lived in a mother-in-law cabin, and cabins become exponentially creepier after you watch a horror movie), I wasn't going to lose weeks of sleep -- anyway, I was already kind of doing that, so nothing much to lose. The next day, I watched the sequel to Ginger Snaps, which is considerably grimmer and less funny, to its detriment. I flinched a bit here and there, but not too much.

In the last few days, I've been watching zombie movies on YouTube -- quite a few have been uploaded mostly or entirely, including the 2004 remake of Dawn of the Dead, which is pretty fun, the amusing spoof Shaun of the Dead, and plenty of inferior genre entries (like Diary of the Dead, which is hokey and not especially scary, and the 2008 direct-to-DVD Day of the Dead, which is less hokey than just plain dull). (28 Days Later, easily my favorite zombie movie, isn't online in one piece, as far as I can tell.) Watching horror on YouTube is kind of ideal -- you have to keep asking for the next portion of the movie, which prevents you from getting sucked into the film's reality too much, and you can pause it whenever you want in order to take a breather. Also, the small screen is less intimidating than a big one, or even a TV screen.

Tonight, however, I decided to take my life in my hands and watch a bona fide horror film at the theater: the new Swedish vampire movie Let the Right One In. (The last horror movie I saw in the theater may have been Trouble Every Day, whose scenes of violence were so agonizing that I closed my eyes and my ears during them.) As critics have been saying, Let the Right One In is a sweet coming-of-age love story that just happens to include vampirism, and it strikes an excellent balance between originality and age-old vampire lore. The players are good (especially Lina Leandersson, the young actress who plays Eli, the vampire), but it's the mood of the film -- unforced melancholy that seems to emanate from both the characters and the snowy Stockholm setting -- that makes it haunting.

As the credits rolled, I turned to Reed and said: "I must be getting desensitized to horror movies, because that wasn't so bad." The truth is, Let the Right One In doesn't traffic in gratuitous violence, which is part of why it's successful (and, I'd argue, part of why any good horror movie works). When the mayhem does get graphic, it has a purpose, and that purpose isn't always to shock you -- sometimes it's to make you sad, or to make you laugh and gasp at the same time. So while there's plenty out there that can still frighten or upset me -- I have particular disdain for Cabin Fever and Hostel director Eli Roth, who is partly responsible for the rise of the "torture porn" genre -- I feel as though I've turned a corner. I can see a horror movie on the big screen, without a pause button at my disposal, and not end up strongly suspecting that at some point during the night my blood will be rapidly drained from my neck by a small but insistent vampire.
Posted by Neal at 10:58 PM