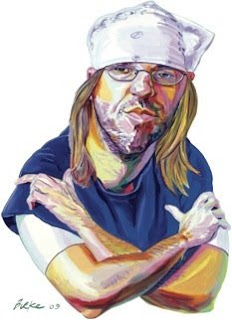 D.T. Max's article in this week's New Yorker explores The Pale King, David Foster Wallace's unfinished third novel. The quietly iconic author of Infinite Jest committed suicide last year; my favorite of his works is the long essay "A Supposedly Fun Thing I'll Never Do Again," which lays bare the creepy nature of luxury cruises. Wallace's voice was consistently dazzling in its intelligence, and his sense of humor was both pointed and good-natured.

His superficial cleverness tended to give way to a kind of aching sadness, and Max's excellent piece reveals that this melancholy existed both inside him and in his vision of America, and Americans. His dissection of media and marketing, of the tiny tragedies of our consumerist society -- like his examination of the "courtesy smile" that's become a cloying, wholly counterproductive staple of customer service -- was rarely less than brilliant. I found a few of his observations, as noted in the article, particularly compelling:

In a letter to Nadell, he had made a promise: “I will be a fiction writer again or die trying.”

This, it seems to me, is precisely the kind of fervor that aspiring writers want; to those who possess it, however, it can be more affliction than blessing.

Wallace was pushing himself to get beyond the facile skepticism of “Broom.” In 1993, he told Whiskey Island, a literary magazine, “This is a generation that has an inheritance of absolutely nothing as far as meaningful moral values, and it’s our job to make them up.”

The quote above leads nicely into the next one:

As he told Salon, “I get the feeling that a lot of us, privileged Americans, as we enter our early 30s, have to find a way to put away childish things and confront stuff about spirituality and values."

Indeed. That's more or less what I'm working through these days; no wonder Wallace resonated with Generation Y. And finally, the quote that might hit closest to home for me:

To DeLillo he wrote, “I do not know why the comparative ease and pleasure of writing nonfiction always confirms my intuition that fiction is really What I’m Supposed to Do, but it does, and now I’m back here flogging away (in all senses of the word) and feeding my own wastebasket.”

I feel this way about writing journalistic pieces versus writing fiction -- the former isn't that hard for me, whereas I can barely get myself to contemplate the latter. Writing, it seems, was the ultimate "supposedly fun thing" in Wallace's life. Yet unlike the frighteningly prepackaged cruise he describes in the essay, he could never get himself to abandon writing, to never do it again. For that, at least, we can be grateful.
Posted by Neal at 10:29 PM