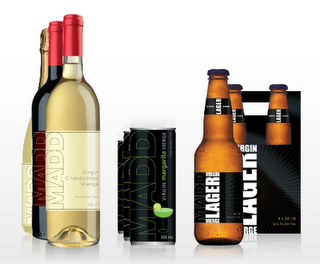 Mothers Against Drunk Driving, which has courted controversy before by shifting its focus from combating drunk driving to fighting underage drinking, recently introduced a line of alcohol-free party beverages called, somewhat unfortunately, MADD Virgin Drinks. While I'm skeptical about the flavor of non-alky wine, I wonder even more about the drinks' real-world appeal. As Kelly noted, it's hard to imagine many adults wanting to be seen at parties holding mother-approved bottles of beer. McClatchy thinks it's pretty boneheaded, too. To wit:

MADD's national president, Laura Dean-Mooney, said the faux margaritas, mojitos, pina coladas, beer and wine will provide hosts the option to serve drinks with "the great taste needed to make guests feel like they are part of the party — but without alcohol."

Nothing like perpetuating the notion that to be part of the party, you either need to drink or to be seen as drinking.

Because the beverages are nonalcoholic, they may be legally consumed by teens. Nothing like acquiring a taste for the unleaded stuff before switching to high-test.