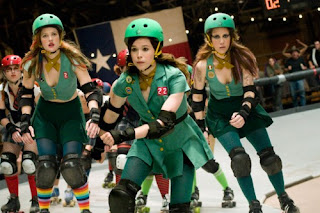 Drew Barrymore's directorial debut, a sweet, funny roller-derby saga, is tremendously good. I had no idea how good it would be. The casting, writing, and direction are whip-smart (no pun intended), and the movie makes very few wrong moves -- every moment entertains, and the emotional ones feel earned.

Ellen Page inhabits a Juno-like character, but her Bliss Cavendar isn't Juno. She's shyer, less sarcastic, more smart than clever. Her little-town blues get swept away by a fateful visit to Austin with her mother, Brooke (played beautifully -- no surprise -- by Marcia Gay Harden), during which a squad of rollergirls swing by, all confidence and tattoos and offhand athleticism. Soon, Bliss and her best friend, Pash (winningly played by Alia Shawkat), are sneaking back to Austin to catch a roller-derby bout, where Bliss falls head over heels in love with the rough-and-tumble sport. She tries out for the Hurl Scouts and, to her immense surprise, makes the team.

Then we find out why it wasn't harder: The Scouts are dead last in the league. Their coach, Razor (the immensely likable Andrew Wilson), tries to get the team to follow a playbook, but they seem perversely pleased to remain at the bottom of the heap. Barrymore playfully casts herself as a brawler, nicknamed Smashley Simpson. (The women's derby names, based on everything I've read and heard, are supremely authentic.) Juliette Lewis is memorable as quasi-villain Iron Maven, and SNL's Kristen Wiig is terrific as Maggie Mayhem, giving a grounded performance that replaces her usual zaniness with an earthier, dryer humor. (Comically speaking, Wiig appears capable of just about anything.) Even Jimmy Fallon, as the league's trackside announcer, nails his part. All of these roles were cast with loving care.

As other critics have noted, the plot isn't particularly surprising, but Whip It packs plenty of small surprises, and I won't give them away. This year hasn't been a great one for true feel-good movies; only Adventureland managed to elate me as much as Whip It. (And lest I forget: Daniel Stern, who hasn't exactly been in the spotlight lately, is excellent as Bliss's sympathetic but passive father. Barrymore and her casting director should take a bow for pulling him out of semi-obscurity.)

I'm especially impressed that Barrymore didn't choose some long, ponderous novel for her debut as a director. (It is, however, based on a novel, by Shauna Cross, who's spent time on skates herself.) As the outtakes during the closing credit sequence reveal, everyone involved had a fantastic time making the film, and that's almost certainly why it's such a joy to watch. I didn't want it to end, and I bet you won't, either. Almost certainly one of my top 10 movies of the year.
Posted by Neal at 10:40 PM