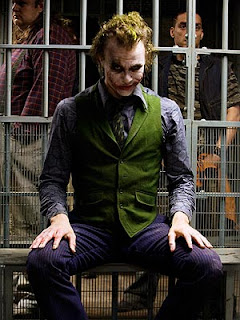 An anonymous commenter gave me flak about my reasoning re: Heath Ledger's likely posthumous Oscar win (the opening phrase, in quotes, is mine):

"but the deceased Dark Knight star should get the statuette not just for the good work he'd already done when he died but for what he would have accomplished in the future."

really? the Oscars are not the place for this sort of "tribute". I guess you can count me as a 'cold bastard', but i'm totally over this obsession with honoring Ledger. yes, he did a good job in TDK and yes, he should have been honored for BROKEBACK MOUNTAIN. But, it will not be a travesty if someone else wins.

Get a grip, please.

What the Oscars are "for" is a matter of much debate. My critic is right, however, to observe that I'm surrendering a bit to how the Academy Awards do work rather than how I (and he) would like them to work. Call it Hollywood realpolitik. Was The Departed Martin Scorsese's finest accomplishment in direction? Nope, but it took the Academy decades to finally get around to honoring him with the Best Director statuette. When they did, it was a de facto lifetime achievement award -- an acknowledgment of his entire career.

Similarly, Heath Ledger turned in an Oscar-worthy performance in Brokeback and another arguably award-worthy one in Dark Knight. His logical trajectory? Maybe a few more roles before it would finally have been his turn, and maybe he wouldn't have won for his best performance -- it happens all the time. So why not cut to the chase and give the man the Oscar he would have won? I'm not saying this necessarily makes the most sense or is the fairest way of operating, but hey, The Reader was nominated for Best Picture this year, and so was Benjamin Button.

The Oscars ain't about fair, but sometimes they split the difference between absurd out-of-touchness and actual hipness, and when they do, that's cause for (minor) celebration. I see the inevitable Ledger award as one such instance. Oh, and you're right -- it certainly won't be a travesty if Josh Brolin, for example, wins for his first-rate performance as Dan White in Milk. I just don't think he's gonna, so I'm glad that Ledger will. See? Realpolitik.
Posted by Neal at 3:40 PM