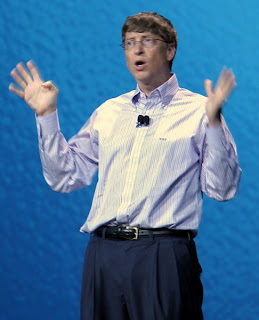 I realized recently that my new job will require me to don "business casual" attire, the definition of which didn't spring swiftly to mind. I had to check the Wikipedia entry on the subject. Really, one glance at their instructive photo of Bill Gates, which appears above, told me everything I needed to know: pants that might be referred to as "slacks" (lose the pleats, though, Bill) plus a collared shirt that wouldn't look out of place if Keira Knightley lounged in it during a GQ photo shoot -- et voilà, business casual! Got it. Thanks, Wikipedia! Thanks, Mr. Gates!

Today I purchased two additional pairs of Dockers brand pants, bringing my total holdings in my size up to three (khaki, weird olive color, and black); I also purchased two dress shirts, one by Ben Sherman and one by some guy named John. (I passed on the $60 Hugo Boss cream shirt, but just barely.) Ladies and gentlemen, I once again have to care about how I look! It's almost like I've moved back to New York. Seriously, though, this is doing me good. A change of pace from jeans and the perennial T-shirt/sweatshirt combo can only boost my self-esteem.
Posted by Neal at 9:40 PM