It's a helluva town 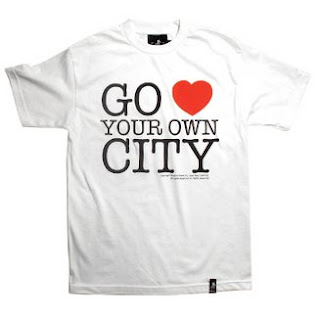 At the beginning of 2005, I knew I wanted to move to New York. I applied for a job at the Village Voice (nothing came of it), and I talked fairly frequently about my intention to check the place out and, if my experience justified my excitement, pick up and go. I visited the city in October of 2005, and it wasn't long before I was smitten. I saw college friends, high school friends, Central Park, Brooklyn, the West Village, and on and on. I called my friend Judith one afternoon and told her: "I'm moving here!" I was very excited.

I left Seattle Weekly in February of 2006, and my immediate plan was to divvy up my stuff into three piles: stuff to sell, stuff to pack, and stuff to ship. I hadn't counted on meeting Emily the month before I quit at the Weekly and starting a relationship that would last into the spring of 2008, but after much soul-searching, I decided to move anyway. I flew from Seattle to New York on April 1, 2006; my half-joking, somewhat superstitious logic was that if it didn't work out, I could always claim the entire move had been an elaborate April Fool's prank.

As it turned out, I took to New York like a bear to honey. I spent the first month in a brownstone with Michael and another guy, and my energy went mostly into looking for a more permanent place to live (after a month, I had to be out of that brownstone) and, of course, a job. The latter came to me via my college friend Miranda, who worked at Global Health Strategies, one of whose principals had recently suffered a herniated disc. I became his personal assistant, and over the next few months I went from fetching vegetable juice and running mundane errands to doing vaccine-related research at the company's Chelsea office. In addition to the job, I joined a softball team, went to a weekly meditation class, worked out at the Y, and had a busy social life. I felt happier than I had in a long time; New York was doing its job.

I was still with Emily, though, and eventually it became clear to us that we didn't want our relationship to end. She wasn't ready to drop her Seattle life and move to New York, and I wasn't willing to lose her, so I made plans to move back in September, right after my friend Jordan's wedding. I remember an August trip to Coney Island that seemed magical: I went alone, rode the Ferris wheel, drove a bumper car, and watched the Friday night fireworks on the beach. I thought to myself: How can I leave this place? My mother used to say that it's a lucky thing when leaving a place hurts, because that means it meant something to you. If that's true, I was a pretty lucky fellow when I left New York.

Readjusting to Seattle took some time. Am I really back here again? was my initial response; I'd wanted to leave so badly that being back seemed sightly surreal. I worked at University Book Store for six months, but retail is decidedly not for me, so when my friend Gary let me know about a copyediting job at NWsource.com, I took immediate action. I ended up working at NWsource for a full year (almost exactly), and I made some wonderful friends there, including my boss and my fellow writers and editors. When I left NWsource in May of 2008, my plan was to move east, either to New York or to an intentional community in Massachusetts.

By now, Emily and I were more or less broken up, but somehow going back to New York didn't feel right. It felt, instead, like a knee-jerk response, a bit of old logic that might no longer hold true. "Well, that didn't work out; guess I'll just go back to New York." That wasn't the spirit in which I wanted to return, and my resolve was accordingly weaker as I began to sell off and pack up my stuff yet again. I'd moved across the country twice in less than half a year in 2006, and all that moving had taken its toll. I only wanted to leave Seattle if there was a very good reason to do so, even though I couldn't articulate that; I still felt trapped here, and convinced that only a geographic fix would help me move on after the breakup. Fate had other plans for me, though: Emily's bike accident in July of 2008 gave me a reason to stick around for a while longer, and while I did I discovered the Ravenna Kibbutz. The rest, as they say, is history.

I mention all of this because my most recent trip to New York, which I returned from less than a week ago, helped clarify things a bit. Visiting in January turned out to be a good idea; it's hard to know what New York in the dead of winter is like unless you experience it firsthand, and I'd only been there in spring, summer, and fall. I went back to my old neighborhood in Brooklyn and didn't feel too much; the magic of the place was closely connected to my state of mind in the spring and summer of 2006, and that time had passed. I liked walking around Manhattan, but I noticed that the hustle and bustle, and the many challenges of life in a giant city like New York, would make a return stressful as well as rewarding.

I never set up a financially sustainable life for myself in 2006, and to do so now, in our dire economy, I'd have to work even harder than I would have had to back then. I do have many friends in New York, including a couple of really good ones, but I have so many friends in Seattle that I'd be losing at least as much as I'd be gaining by moving. It would be a bittersweet trade-off rather than the decidedly joyous experience I had in 2006 (though it would have been less joyous had Emily and I actually broken up when I left Seattle).

When I think of New York today, I don't see it as my inevitable destination. I'm still not sure I want to stay in Seattle for good, but my life here has improved in the last few months. I've settled into Kibbutz life and appreciate both my housemates and the many wonderful members of the community we continue to nurture and expand, and I'm enjoying my new job at Childhaven as well as the freelance writing I'm doing for Jew-ish.com. My 30th birthday is approaching, and while it's hard to completely shake the restlessness of my twenties, I feel a little less troubled by the notion of living in Seattle for a while longer.

When Emily and I dated, we both thought of New York as a rival girlfriend, an entity I loved that could keep us apart. Now I see the city as a former flame I may want to be just friends with. Maybe time and circumstance will rekindle our romance in the future, but I'm not as intent on making that happen as I used to be. Earlier today, an idea popped into my head as I thought about my recent stay in New York and the understanding it imparted: There's what we know and what we can't possibly know, and leveraging the former against the latter might be the key to a fulfilling life. I can't possibly know precisely what my future will entail, or where life will take me, geographically or otherwise, but it's nice to know a little more about what New York means to me, and what it doesn't.
Posted by Neal at 12:08 PM