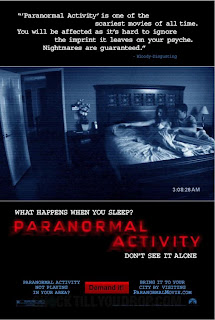 Israeli-born director Oren Peli's ultra-low-budget horror film works like a campfire ghost story. It's simple, it progresses in increasingly agonizing stages, and it ends with a punch that lands like a hammer. We've seen its elements many times before: normal middle-class couple; creepy, unexplainable happenings in their well-furnished home; a ghost whisperer called in to consult; research into spirits and demonology; and elevated desperation as the intruder's doings become scarier and scarier.

Yet Peli gives the entire enterprise a polish by making his main characters realistically irritating (yes, even more so than Blair Witch's campers) and by employing a device I haven't seen before: continuing to film the couple at night, while they sleep. Blair Witch was smart to give horror the home-movie treatment, but Paranormal is smarter still. Its sinister events take place in the one location we retreat to at the end of a long day for rest and shelter: the bedroom.

As in Blair Witch, the stars are unknown actors who use their real names in the film. Katie (Featherston), curvy and pretty but not Hollywood gorgeous, expresses her character's mounting dread with physical and emotional force, while her skeptical boyfriend, Micah (Sloat), mocks her rising panic and proposed solutions. (He's particularly against calling in a demonologist, an approach that the film implies might have worked.) We drop into their story in medias res: They've already noticed strange stuff going on around the house (primarily odd noises), and Micah has bought a fancy video camera to record whatever happens next.

Like the cameraman figures in Blair Witch, Cloverfield, and George Romero's Diary of the Dead, Micah is obsessed with keeping the camera rolling in a way that serves the plot but stretches credibility. To the filmmakers' credit, Katie is always telling him to drop it, an acknowledgment that his videophilia is exaggerated for narrative purposes. Also as in Blair Witch, physical clues begin to appear: an old photograph that shouldn't still exist, a framed picture that's been cracked and clawed (!), a ouija board burnt by inexplicable means.

Katie begins to sleepwalk; in one instance, Micah finds her on the back patio in the middle of the night. Her demeanor during her somnambulant episodes contrasts startlingly with her usual, expressive way of being. As a sleepwalker, she's emotionally blank, sluggish, oblivious. The film shifts between daylight hours, during which relatively few supernatural things occur, and nighttime, which becomes more upsetting for the viewer each time it returns (cleverly mirroring the characters' own experience).

The actions of the demon escalate slowly -- torturously slowly, it sometimes seems -- and while some of what happens is less than novel (doors move on their own, weird noises occur), Peli doesn't use tropes so familiar they'd elicit more giggles than shrieks. (No one levitates several feet above the bed or speaks in tongues; no one vomits. At one point, however, Micah finds Katie clutching a small brown cross, and her hand is bloody. This reference to religion, and stigmata in particular, I could have done without.)

The first 98 minutes of Paranormal are ultimately little more than a buildup to the extremely memorable 99th, which feels branded on my memory (like Blair Witch's similarly disturbing last shot) and may remain so for some time. I saw the film at a midnight show on Halloween, and though the auditorium wasn't packed, there were a decent number of college kids on dates or in groups. After the lights went up, most of the boys made a big show of how not scared they were; the girls, on the other hand, didn't dissemble. They, like me, were petrified, and unable to hide it.
Posted by Neal at 9:14 PM