Michael drew my attention to this piece in The Atlantic about the changing landscape of network TV. The first part of the article tells the sad story of Heroes creator Tim Kring, who recently dissed his own viewers -- some of them, anyway -- in an interview:

The serialized format is “a very flawed way of telling stories on network television right now,” a blogger quoted Kring as saying, “because of the advent of the DVR and online streaming. The engine that drove [serialized TV] was, you had to be in front of the TV [when it aired]. Now you can watch it when you want, where you want, how you want to watch it, and almost all of those ways are superior to watching it on-air.”

Then, in a fit of pique for which he is still apologizing, he said: “So on-air is [relegated] to the saps and the dipshits who can’t figure out how to watch it in a superior way.”

The Atlantic piece doesn't break much new ground, but it does provide a useful overview of the networks' current state of affairs. Hint: It's not unlike that of our economy. 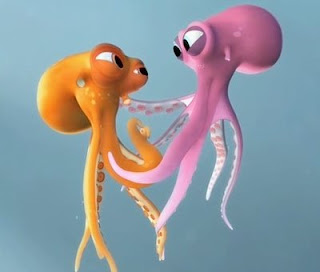 On a somewhat brighter note, I saw both the live-action and animated Oscar-nominated shorts this week (they're playing at the Varsity at least through Thursday), and I have much good news to report, and only a little bad. Interestingly, the live-action films were more consistent than the animated ones; often it's the other way around. Denmark's The Pig, about a old man who becomes sentimentally attached to a portrait of a pig while in the hospital, has a pretty good sense of humor and a decent premise; its biggest problem is that it goes on a bit too long.

Not so Manon on the Asphalt, the most beautiful of the live-actioners visually -- I could have watched it again the minute it ended. It tells the simple story of a young French woman who bicycles without a helmet in Paris and thus meets her demise. As she dies, she thinks about all the people in her life and everything she hasn't done yet, and never will. It sounds incredibly mawkish, but co-directors Elizabeth Marre and Olivier Pont employ a lively, colorful style that strikes a nice balance of pathos and joie de vivre. What's more, they really know how to use light. If L'Auberge Espagnole director Cédric Klapisch decided to make a short about a death swoon, it might look and feel a lot like this.

Also good: Ireland's New Boy, adapted from a Roddy Doyle story, and easily the funniest of the bunch. Again, a potentially hackneyed premise (Zimbabwean boy moves to Ireland, faces torment at the hands of insensitive classmates) is winningly fleshed out; it's written with great economy and wit, and cut superbly. Nice use of music, too. Even On the Line, which deals with pretty dark themes -- voyeurism, loneliness, murder, deception -- rarely loses its footing. The protagonist is a glum security guard who falls in love with a pretty bookstore clerk while watching her on the store's security camera (shades of Red Road's treatment of surveillance and obsession). The plot takes a few unexpected turns, and the film ends on a deliciously ambiguous note that continues to haunt me. Toyland, a forgettable Holocaust story (and part of Germany's unfortunate cinematic habit of flagellating itself about World War II), is the only entry I really could have done without.

The animated nominees: more of a mixed bag. Still, Oktapodi, a brisk two-minute romantic adventure starring octopi (pictured above), is a total winner in the Pixar mold, and House of Small Cubes, a sadder, slower, more nostalgic kind of love story, has stayed with me as well. One of the also-rans, which round out the animated program, won my heart, too: John & Karen, which manages to make British humor cuddly without surrendering its wry edge. Bill Plympton's Hot Dog, another also-ran, offers the cult animator's usual mix of perversity and light-heartedness, and it's a delight. Worst of the pack: Varmints, a 24-minute environmental parable that manages to be simultaneously preachy and deadly dull. Use this movie's bloated running time to get yourself a bit more popcorn, or maybe some frozen Junior Mints.
Posted by Neal at 10:00 PM