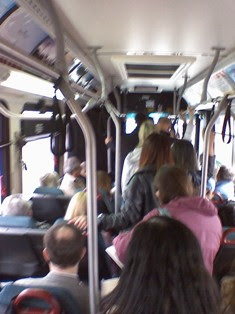 Okay, not actual mayhem. But the threat of mayhem -- the definite possibility thereof.

I took the #71 downtown today instead of the #64, which takes me directly to work. Assorted people stood with me at the #71 stop in Ravenna, including a very nice Australian lady, and we all talked about Seattle's three snowplows and climate change. Despite the unseasonable cold, we had a nice time. At the Westlake station of the transit tunnel, I got out and walked to the #3, doing in reverse what I do every day to get home. I boarded the #3 on First Avenue, and it wasn't unusually full when I got on, but as we moved toward the hillclimb more people crowded in, until it was hard to move, breathe, etc. Then we started to go up the hill. We reached Fifth Avenue before the driver decided we had too many people -- we were too heavy to ascend the slope (this was a trolley bus). Then something happened that reminded me, perversely, of the scene in The Dark Knight wherein Heath Ledger's Joker attempts a nasty little social-psychology experiment, telling the passengers on each of two ferryboats that they have to blow up the other boat in order to survive. Spoiler alert: Human nature isn't quite as dark as the Joker presumes it to be, and everything turns out fine.

On the #3, there was much grumbling after the driver stopped the bus and told us that unless someone got off, none of us would be going anywhere, because we simply couldn't get up that hill with so many bodies crammed into the vehicle. There was swearing among the passengers, and no one, myself included, wanted to hike up Jefferson Street in the cold. We stood there for about ten minutes, and then people finally started to get off the bus. Before that happened, I thought more clearly about class and Metro than I had in some time. I'm scheduled to get my car back Monday evening, but a lot of the people on the #3 probably didn't have cars at all. When you don't have much money and can't afford an alternative, you have to put up with whatever bullshit Metro throws at you.

In this case, the bus driver was scolding us for being stubborn, but a woman at the back of the bus rightly pointed out that the driver, knowing the route, could have kept such a big crowd from accumulating in the first place. (Indeed, it was within her power not to open the back door and to tell people trying to get in the front that they were out of luck.) The woman in back claimed, perhaps a bit cynically, that the driver insisted on packing the bus beyond capacity because Metro hungers for our money. While I doubt this driver's motivation was primarily financial, the angry rider made a good point: Overstuffing a bus and then forcing people out is kind of a raw deal. (Then again, most of the people on the bus had boarded in the free-ride zone, and no one who got off at Fifth and Jefferson had to pay.) Anyway, the bus eventually got moving.

I look forward to having the option of driving again in the near future, but the other day I ran into an acquaintance from Oberlin who lives in South Seattle and doesn't have a car (he works in West Seattle, mostly), and he seemed perfectly happy busing, biking, and walking places. As I said, I'm still glad I have a car, but I plan to drive it to work just a couple days a week after I get it back. And while I wouldn't appreciate such an eventful commute every day, it was certainly an eye-opening experience. A nice balance, in a way: At my first stop, I saw people bond in a way that's unusual in keep-to-yourself Seattle, and on the #3 I witnessed equally uncharacteristic expressions of anger -- more Big Apple than Emerald City.

(By the way, credit for the photo above goes to Seattlest.com, not me.)
Posted by Neal at 4:48 PM